PRT-Forest started its operations in 1968 as Pyhännän Rakennustuote Oy. Since then, it has grown from a small company manufacturing saunas and holiday apartments into a leading wooden and log construction group. The history of the group, which is still mainly owned by the family of teollisuusneuvos Veijo Sydänmetsä, is long and eventful. Our experience and knowledge have ensured that we have remained pioneers in wooden construction for over 50 years.

In the 1960s, means were sought for in Pyhäntä to stop the working aged population from leaving the remote and forested rural municipality. The forests had been allowed to grow in peace in the municipality, as the result of which sawmill operations were started in the mid-1960s. In 1966, the industrial committee of the municipality decided to establish Pyhännän Rakennustuote, a company specialising in the industrial manufacture of prefabricated houses.

The first factory that manufactured prefabricated houses was constructed in the Kirkkoniemi industrial area. Office and storage buildings were in short supply in Pyhäntä, for which reason Veijo Sydänmetsä, who was appointed the first CEO of the company in 1968, had to accommodate not only his wife but also the office premises of the company in his terraced house apartment. Sydänmetsä immediately showed that he had the skills needed in the first years of Pyhännän Rakennustuote.

At the beginning, the company mainly manufactured saunas and holiday homes. The aim was that the quick-to-erect prefabricated houses would become at least as popular or even more popular than traditional log houses. This is not, however, what happened. Instead of holiday home constructors, prefabricated units stirred the interest of the housing construction sector. In 1969, the manufacture of a first detached house began. As the result, Jukka-talot was established, which was especially well known for the thick wall insulation and low heating costs of the houses.

In the 1970s, the shortening of the work week to five days provided the working-class with more leisure time, which the population used on self-building, for example. The growing demand enabled Pyhännän Rakennustuote to focus on detached houses. Jukka-talot renewed its image, but the core – the insulation – remained its competitive advantage. Growth was built strategically and on a long-term basis based on energy questions, as their significance for the future of the sector was considered to be significant.

Growth was sought by expanding the corporate base: Pyhännän Einestuote Oy, founded in the autumn of 1972, employed women in the rural municipality through the manufacture of Ilona ketchup and other convenience foods. Viiskasi Oy, a sawmill located in Pyhäntä, became the subsidiary of Pyhännän Rakennustuote in 1973. In 1975, construction contracting was incorporated into a separate company, Rakennuskartio Oy.

The company continued to grow steadily in the 1970s. Rakennustuote became international when project exports to the Soviet Union were started. Factories and properties were expanded and modernised to ensure that the production met the demand. Veijo Sydänmetsä recruited strategically and employed young professionals into the company, who later constituted the administrative board of Rakennustuote.

The 1980s was an era of growth for the construction industry. The phrase miracle of Pyhäntä was coined, meaning the emergence of a pioneer in the wooden construction industry from a small rural municipality. The growth was based on the courage to invest and specialise, for which reason Einestuote was acquired by Gustav Paulig Oy in 1980. Sydänmetsä, who steered the growth, was selected the businessman of the year 1981. In 1982, Rakennuskartio was sold to its executive management.

The group focused on self-sufficiency, and in the 1980s, it acquired a sawmill in Pyhäsalmi. An impregnating plant was founded next to the sawmill. As the operations expanded, new warehouses, production facilities, and a magnificent headquarters building that even became a tourist destination, were constructed on a plot located in Leiviskänkangas. Encouraged by the growth, Rakennustuote bravely broke all ties with Kesko, the leading seller of house packages, in late 1982 and established its own national sales network.

As a brave pioneer, Rakennustuote invested in information technology, such as a plotter and CAD software. The personnel were given access to dozens of computers in 1984, as the result of which Pyhäntä became, at one go, the municipality with the highest person/computer ratio in Finland. The company also invested in the training of young professionals: a vocational school was founded next to the factory and training cooperation continued later in Kajaani with the University of Oulu.

Rakennustuote believed in visionaries, who helped to streamline its production and lower the manufacturing costs. The company entered the log construction market by acquiring Kontiotuote Oy in 1986. At the end of the decade, log buildings constructed by Kontiotuote were seen as far away as in Sapporo in Japan. The growth of factory-made houses continued until the end of the decade.

In the early 1990s, the depression caused turmoil on the market, as the prices of and demand for housing collapsed. Mikko Huhtala, who had made his way from a sales manager to a CEO, had to make tough decisions. He was familiar with the American model and managed to make the idea of purchasing a house more attractive through campaigns.

Courage and far-sighted investments in the operations and subsidies of the company helped Rakennustuote pull through the depression relatively unbruised. Tough adjustments had to be made, whilst having the courage to look far into the future. As a result, Mellano Oy was added into the group in 1992 and LappliTalot Oy in 1994.

In 1997, Pyhännän Rakennustuote Oy became PRT-Forest Oy, and Sydänmetsä continued as the group director. The house construction industry and the sawmill industry at the opposing ends of the same processing chain were incorporated into independent limited companies.

The 2000s was a decade of major changes. Veijo Sydänmetsä retired in 2004, having steered the group successfully for nearly 40 years. In 2005, the window factory of the group was incorporated into a new subsidiary Piklas Oy. In the following year, an automated line for manufacturing large, prefabricated units was inaugurated in Pyhäntä, which enabled the group to focus on even more individually designed house packages. The inclusion of Jokeri-talot Oy into the group, on the other hand, marked an expansion of operations into a new area of prefabricated units, even though the concept was relatively soon discontinued.

Even the financial crisis at the end of the decade did not unsettle PRT, as it celebrated its 40 years of operations.

The 2010s was the decade of reforms. The operations were decentralised in 2014 so that Jukkatalo Oy focused on manufacturing small houses for consumers and Pyhännän Rakennustuote focused on professional customers. Despite the imposing wooden construction projects of Rakennustuote, the production of wooden blocks of flats did not take off and the operations were discontinued. In addition, a tough decision had to be made to close down the Pyhäntä sawmill in 2017, which proved to be an important solution as regards the overall economy of the group.

Kontiotuote continued as the market leader in log construction throughout the tumultuous decade, and it was the unfailing foundation that kept the group going whilst other operations were being reformed. The changes and difficulties experienced by the companies created new operating methods that will show their value in the coming years.

Who would have guessed how the new decade begins. The impact of the COVID-19 pandemic on business operations was, at first, paralysing. After the initial scare, however, the volume of orders recovered, and Finland entered an era of construction. After seven unprofitable years, the group’s result was positive in 2020. This was not achieved without tough decisions, as a decision was made to discontinue the operations of Lappli-Talot.

However, tough decisions enable a brighter future. Kontiotuote Oy, steered by the new CEO, made a record result thanks to earlier made adjustments. The outlook of Jukkatalo Oy and Piklas Oy is also pretty good. This is an excellent starting point for the approaching 60th anniversary celebration of the company. 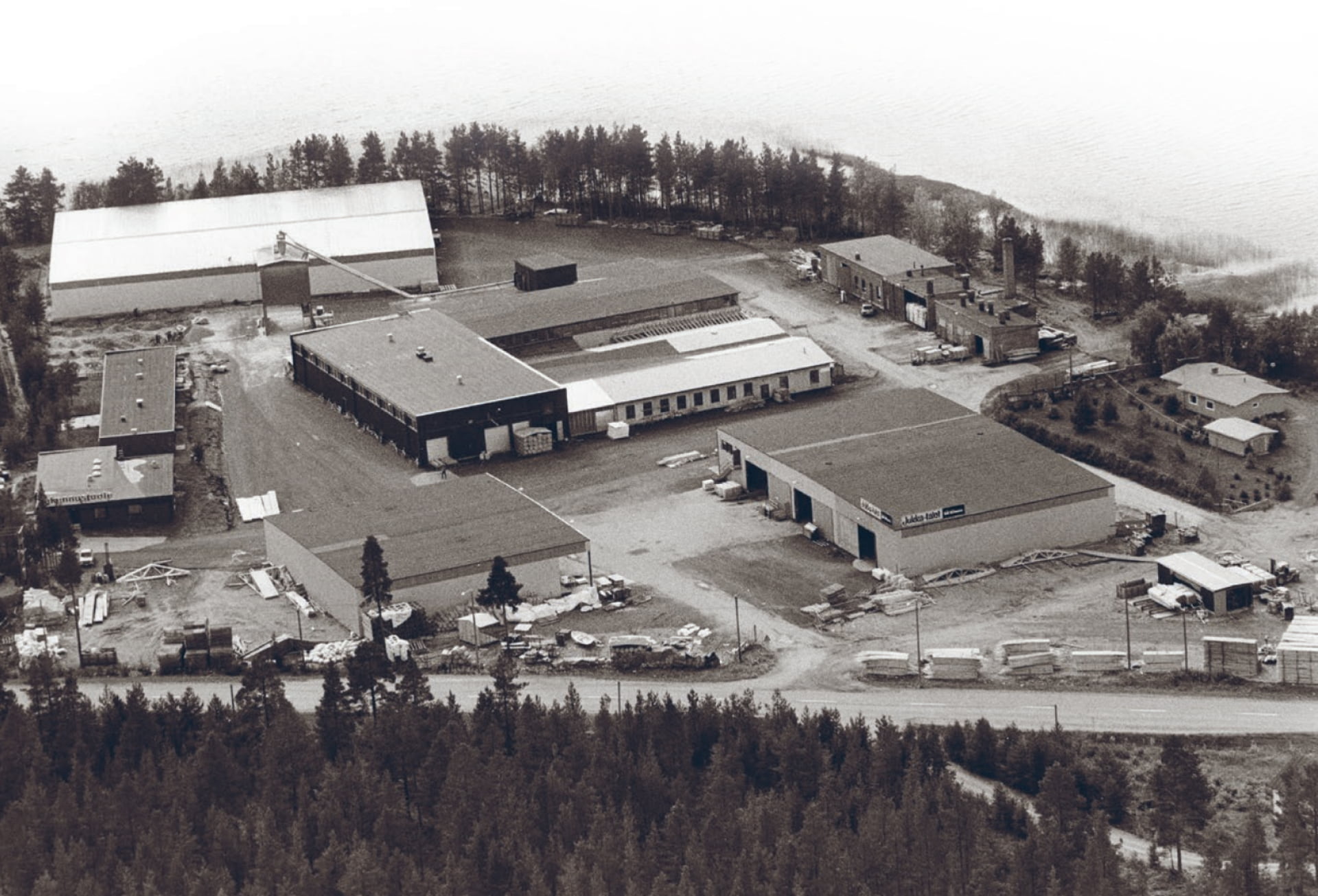